What happens when new artificial intelligence (AI) tools are integrated into organisations around the world?

For example, digital medicine promises to combine emerging and novel sources of data and new analysis techniques like AI and machine learning to improve diagnosis, care delivery and condition management. But healthcare workers find themselves at the frontlines of figuring out new ways to care for patients through, with - and sometimes despite - their data. Paradoxically, new data-intensive tasks required to make AI work are often seen as of secondary importance. Gina calls these tasks data work, and her team studied how data work is changing in Danish & US hospitals (Moller, Bossen, Pine, Nielsen and Neff, forthcoming ACM Interactions).

Based on critical data studies and organisational ethnography, this talk will argue that while advances in AI have sparked scholarly and public attention to the challenges of the ethical design of technologies, less attention has been focused on the requirements for their ethical use. Unfortunately, this means that the hidden talents and secret logics that fuel successful AI projects are undervalued and successful AI projects continue to be seen as technological, not social, accomplishments.

In this talk Professor Gina Neff, Oxford Internet Institute and Professor Ian Goldin, Oxford Martin School, will examine publicly known “failures” of AI systems to show how this gap between design and use creates dangerous oversights and to develop a framework to predict where and how these oversights emerge. The resulting framework can help scholars and practitioners to query AI tools to show who and whose goals are being achieved or promised through, what structured performance using what division of labour, under whose control and at whose expense. In this way, data work becomes an analytical lens on the power of social institutions for shaping technologies-in-practice. 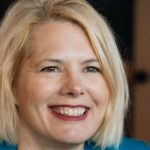 Professor Gina Neff is a Professor of Technology and Society at the Oxford Internet Institute and the Department of Sociology at the University of Oxford. She studies the future of work in data-rich environments. She has published three books and over four dozen research articles on innovation and the impact of digital transformation. Her most recent book, Self-Tracking, co-authored with Dawn Nafus (MIT Press, 2016), focuses on the practices and politics of using consumer technologies to track health and other everyday personal metrics. Her book about the rise of internet industries in New York City, Venture Labor: Work and the Burden of Risk in Innovative Industries (MIT Press, 2012), won the 2013 American Sociological Association’s Communication and Information Technologies Best Book Award. Her next book, Building Information: How teams, companies and industries make new technologies work is co-authored with Carrie Sturts Dossick, with whom she directed the Collaboration, Technology and Organizations Practices Lab at the University of Washington. A pioneer in creating the area of “human-centred data science,” Professor Neff leads a new project on the organisational challenges companies face using artificial intelligence for decision making.

She holds a PhD in sociology from Columbia University. Professor Neff has had fellowships at the British Academy, the Institute for Advanced Study and Princeton University’s Center for Information Technology Policy. Her writing for the general public appears in Wired, Slate and The Atlantic, among other outlets. She is the responsible technology advisor to GMG Ventures, a venture capital firm investing in digital news, media and entertainment companies. She is a strategic advisor on AI to the Women's Forum for the Economy & Society and leads the Minderoo Foundation’s working group on responsible AI. She serves the steering committee for the Reuters Institute for the Study of Journalism, the advisory board of Data & Society Research Institute, and is a member of the Royal Society’s high-level expert commission on online information.

Goldin has received wide recognition for his contributions to development and research, including having been knighted by the French Government and nominated Global Leader of Tomorrow by the World Economic Forum. He has published over 50 articles and 22 books. He is the presenter of three BBC series After the Crash, Will AI Kill Development? and The Pandemic That Changed the World, and co-author of Terra Incognita: 100 Maps to Survive the Next 100 Years being published in August 2020. More information can be found at iangoldin.org