Businesses have played a significant role in degrading the social, economic, ecological, and governance commons, but they can play an equal role in restoring them through the development of seven regenerative qualities?

This event will be taking place in person at the Manor Road Building, or you can join online.

Please register to join this seminar at https://www.inet.ox.ac.uk/even... 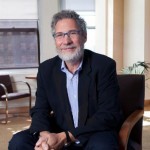 He is based in New York and leads the firm’s vision, program and growth, developing award winning new projects, investment funds and city plans to model solutions integrating the issues of affordable housing, community development, culture and the environment. The firm is one of the largest acquirers of affordable and mixed income housing in the United States.

Jonathan is the Vice Chair of the Board of Enterprise Community Partners. He and his wife Diana Calthorpe Rose are the co-founders of the Garrison Institute and he serves as Chair on its Board and leads its Pathways to Planetary Health Program. He is an Honorary Member of the American Institute of Architects and Honorary Trustee of the American Museum of Natural History, Jazz at Lincoln Center and Brooklyn Academy of Music.

Jonathan is a member of the Council on Foreign Relations. He also advises the Government of Bhutan on urban planning issues.

Jonathan is the author of The Well-Tempered City: What Modern Science, Ancient Civilizations and Human Nature Teach Us About the Future of Urban Life.

The book was published by Harper Wave in 2016, and won the 2017 PROSE Award for Outstanding Scholarly Work by a Trade Publisher.

He has now begun to research and write his next book, The Well-Tempered Society, proposing a societal shift towards relational systems that support the commons.

Jonathan graduated from Yale University in 1974 with a B.A. in Psychology and Philosophy, and received a Masters in Regional Planning from the University of Pennsylvania in 1980, and has an Honorary Doctorate from the New School. In 2015, he held the Yale School of Architecture’s Edward P Bass Distinguished Visiting Architectural Fellowship. In 2021, he received the Urban Land Institute's Urban Visionary Prize.