Fusion could, if developed, play a major role as a major "firm" addressable power source in the future decarbonised energy supply.

However, considerable innovation is needed to bring it to market. The US National Academy has recently called for the US to adopt a strategy to produce fusion electricity from a compact pilot plant by the 2040s. The UK's STEP program has similar ambitions.

This timeline requires innovations in technology (e.g. superconducting magnets and power handling systems) and innovations in physics. Significant sums of money (greater than $4 Billion) have been raised by private companies seeking to develop fusion systems on an even faster timescale.

Join Professor Sir Steve Cowley, Director of the Princeton Plasma Physics Laboratory, as he discusses the challenges and the prospects for an accelerated delivery of fusion.

This talk is live in-person and online via Crowdcast (registration required).

Please note this talk is not being recorded and therefore will not be available to watch afterwards. 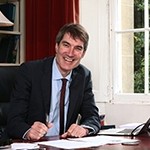 Steven Cowley, a theoretical physicist and international authority on fusion energy, became the seventh Director of the Princeton Plasma Physics Laboratory in 2018, and a Princeton professor of astrophysical sciences. Most recently president of Corpus Christi College, former Director of the Oxford Martin School and professor of physics at the University of Oxford in the United Kingdom since 2016,

Cowley previously was chief executive officer of the United Kingdom Atomic Energy Authority (UKAEA) and head of the Culham Centre for Fusion Energy.