In his 2018 book, On the Future, Martin Rees argued that humanity has reached a critical moment.

Our world is unsettled and rapidly changing, and we face existential risks over the next century. Various outcomes - good and bad - are possible. Yet our approach to the future is characterised by short-term thinking, polarising debates, alarmist rhetoric, and pessimism. Achieving the best prospects for humanity will depend on our taking a very different approach to planning for tomorrow than we do at present.

In conversation with Charles Godfray, Martin Rees will explore how the global experience of the COVID-19 pandemic might change the way societies and policymakers grapple with the major challenges of the 21st century. 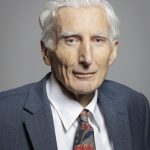 Martin Rees (Lord Rees of Ludlow, OM FRS) is an astrophysicist and cosmologist, and the UK's Astronomer Royal. He is based at the University of Cambridge where he has been Professor of Astronomy and Director of the Institute of Astronomy. Martin is also a member of the Oxford Martin School's Advisory Council. Martin is a Fellow, and was the former Master, of Trinity College, Cambridge.

After studying at the University of Cambridge in the 1960s, he held post-doctoral positions in the UK and the USA, before becoming a professor at the University of Sussex. In 1973, Martin became a fellow of King's College and Plumian Professor of Astronomy and Experimental Philosophy at Cambridge (continuing in the latter post until 1991) and served for ten years as Director of Cambridge's Institute of Astronomy. From 1992 to 2003 he was a Royal Society Research Professor, and then from 2004 to 2012, Master of Trinity College. In 2005, Martin was appointed to the House of Lords, and he was President of the Royal Society from 2005 to 2010.

He has been increasingly concerned in recent years about long-term global issues – the pressures that a growing and more demanding population are placing on environment, sustainability and biodiversity; and the impact of powerful new technologies. He is co-founder of the Centre for the Study of Existential Risk (CSER) at the University of Cambridge with a focus on these issues.

Martin is a foreign associate of the US National Academy of Sciences, the American Philosophical Society, and the American Academy of Arts and Sciences, and an honorary member of the Russian Academy of Sciences, the Pontifical Academy, the Japan Academy and several other foreign academies. In the UK, he is an honorary member of the British Academy, the Academy of Medical Sciences and the Royal Academy of Engineering. Martin’s awards include the Gold Medal of the Royal Astronomical Society, the Balzan International Prize, the Heineman Prize for Astrophysics (AAS/AIP), the Bower Award for Science of the Franklin Institute, the Cosmology Prize of the Peter Gruber Foundation, the Einstein Award of the World Cultural Council, the Crafoord Prize of the Swedish Royal Academy of Sciences, the Templeton Prize and the Dirac Prize. He has honorary degrees from numerous universities, including Harvard, Yale, Sydney, Melbourne, Oxford and Cambridge. Martin has been president of the British Association for the Advancement of Science (1994-95) and the Royal Astronomical Society (1992-94), as well as a trustee of the British Museum, NESTA, the Kennedy Memorial Trust, the National Museum of Science and Industry, the Cambridge Gates Trust, and the Institute for Public Policy Research. He is currently on the Board of the Princeton Institute for Advanced Study, and has served on many bodies connected with education, space research, arms control and international collaboration in science.

In addition to his research publications, which total over 500, he has written extensively for a general readership. His ten books include 'Just Six Numbers', 'Our Cosmic Habitat', ‘Gravity’s Fatal Attraction’, and the recently-published, 'On the Future: Prospects for Humanity'.