The oldest parts of the continental crust generate between 0.36–2.273×1011 moles H2 per year through water-rock reactions and radiolysis [1]. Over geological timescales the natural hydrogen generated would supply society’s current oil-equivalent needs with clean energy for well over 100,000 years. Natural (gold) hydrogen is found in many locations globally [1], but until recently has not been the focus of resource exploration. We show how Helium, generated during radiolysis, provides a key reference for understanding:

These provide the key steps in addressing whether, and where, natural (gold) hydrogen might provide a viable and significant clean energy resource.

This event is organised by Oxford Energy, with the Oxford Martin School Programmes on the Post-Carbon Transition and the Future of Cooling 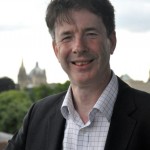 He holds a prestigious Eni industry award for the application of gas isotopic tracers in developing our understanding of oil and gas systems, carbon dioxide waste storage, groundwater security, and commercial helium accumulation. He has held major research contracts with multinationals such as ExxonMobil, Statoil and Total, as well as the UK, European and US governments. He has served as President of the European Union of Geochemistry and, until recently, was a Board member of the AGU with a membership >60,000.