If one takes a systems approach to healthcare, it is obvious that it should be predictive, preventive, personalised and participatory (P4).

This can be accomplished, in part, by a vision which includes following the health trajectory of each individual with a data-driven (genome/longitudinal phenome) approach to, after proper analyses, optimise wellness and avoid disease. This is the essence of what precision population health should be. To achieve this object, Dr Leroy Hood, CEO of Phenome Health, has proposed a “2nd human genome project”, termed Beyond the Human Genome, to analyse the genomes and longitudinal phenomes of one million individuals over 10 years with federal support. He has founded a non-profit company, Phenome Health, to develop the strategies and accumulate effective partners to carry out this initiative, which he will discuss in this talk.

The first three Ps have to do with science and they lead to what Dr Hood calls the science of wellness and prevention. The fourth P, 'participatory', has to do with education, psychology and sociology and is by far the most difficult to achieve. How does one persuade patients, physicians, healthcare leaders, regulators, and industrial members of the current healthcare ecosystems to accept this paradigm change in how medicine is practiced?

One clear need is a broad-scale education program to bring an understanding of just what P4 medicine is and how it can be achieved through the Beyond the Human Genome project. A second approach is to offer viable solutions to each of the five largest challenges of contemporary medicine - quality, ageing population, exploding chronic diseases, racial equity and excessive costs. The 10-year demonstration project of Beyond the Human Genome will provide striking new solutions to each of these challenges, as Dr Hood will discuss. 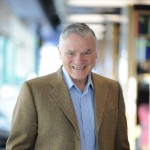 A world-renowned scientist and recipient of the National Medal of Science in 2011, Dr Leroy Hood co-founded the Institute for Systems Biology (ISB) in 2000 and served as its first President from 2000-2017. In 2016, ISB affiliated with Providence St. Joseph health (PSJH) and Dr Hood became PSJH’s Senior Vice President and Chief Science Officer. He is also Chief Strategy Officer and Professor at ISB.

He received his MD from Johns Hopkins University School of Medicine and his PhD in biochemistry from Caltech. Dr Hood was a faculty member at Caltech from 1967-1992, serving for 10 years as the Chair of Biology. During this period, he and his colleagues developed four sequencer and synthesizer instruments that paved the way for the Human Genome Project’s successful mapping and understanding of the human genome. He and his students also deciphered many of the complex mechanisms of antibody diversification. In 1992, Dr Hood founded and chaired the Department of Molecular Biotechnology at the University of Washington, the first academic department devoted to cross-disciplinary biology.

Dr Hood has co-founded 17 biotech companies including Amgen, Applied Biosystems, Rosetta and Arivale. His many national and international awards include the Lasker Prize, the Kyoto Prize, and the National Medal of Science. Currently, he is the CEO of Phenome Health and Co-Founder and Professor at the Institute of Systems Biology in Seattle.