The global pandemic has derailed progress toward the SDGs as developing countries now balance long-term investments in health, education, roads, electricity, and water with spending to protect lives and livelihoods.

Bringing the SDGs within reach by 2030 will take a global effort from all stakeholders.

The International Monetary Fund (IMF) has run the numbers and is publishing a framework for developing countries to consider policy choices that can raise long term growth and bring in private investments in SDG projects. In this conversation with Ian Goldin, Kristalina Georgieva will look at country case studies and the kinds of reforms each can make to move towards the SDGs by 2030.

Although it looks as though the building blocks of prosperity have moved just a bit farther out of reach, the roadmap for how to get there is now clearer.

To register and watch this talk live: www.crowdcast.io/e/kristalina-georgieva 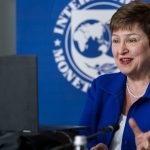 Kristalina Georgieva currently serves as Managing Director of the International Monetary Fund, a position she was selected for on September 25, 2019 and has served as since October 1, 2019.

Previously, Ms Georgieva helped shape the agenda of the European Union while serving as European Commission Vice President for Budget and Human Resources. In this capacity she oversaw the EU’s €161 billion (US $175bn) budget and 33,000 staff, as well as the EU’s response to the Euro Area debt crisis and the 2015 refugee crisis. Before that, she was Commissioner for International Cooperation, Humanitarian Aid and Crisis Response, managing one of the world’s largest humanitarian aid budgets.

Ms Georgieva began her career in public service at the World Bank as an environmental economist in 1993. After serving for 17 years, and in many senior positions, including Director for Sustainable Development, Director for the Russian Federation, Director for Environment, and Director for Environment and Social Development for the East Asia and Pacific Region, her career culminated in her appointment as Vice President and Corporate Secretary in 2008. In this role, she served as the interlocutor between the World Bank Group’s senior management, its Board of Directors, and its shareholder countries.

Ms Georgieva serves on many international panels including as co-Chair of the Global Commission on Adaptation, and as co-chair of the United Nations Secretary-General’s High-Level Panel on Humanitarian Financing. She has authored and co-authored over 100 publications on environmental and economic policy, including textbooks on macro- and microeconomics.

In 2010, she was named “European of the Year” and “Commissioner of the Year” by European Voice in recognition for her leadership in the EU’s response to humanitarian crises. In October 2020, she received the Atlantic Council’s Distinguished International Leadership Award in acknowledgement of exceptional and distinctive contributions during her career of public service.

He has published over 50 articles and 22 books. He is the presenter of three BBC series After the Crash, Will AI Kill Development? and The Pandemic That Changed the World, and co-author of Terra Incognita: 100 Maps to Survive the Next 100 Years. More information can be found at iangoldin.org