In response to the devastation caused by COVID-19, governments & businesses around the world need to adopt new policies which prioritise people and our planet.

To register and watch live: https://www.crowdcast.io/e/prof-joseph-stiglitz 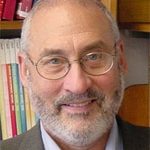 Joseph E. Stiglitz is an American economist and a Professor at Columbia University. He is also the co-chair of the High-Level Expert Group on the Measurement of Economic Performance and Social Progress at the OECD, and the Chief Economist of the Roosevelt Institute.

A recipient of the Nobel Memorial Prize in Economic Sciences (2001) and the John Bates Clark Medal (1979), he is a former Senior Vice President and Chief Economist of the World Bank and a former member and Chairman of the (US president's) Council of Economic Advisers.

In 2000, Stiglitz founded the Initiative for Policy Dialogue, a think tank on international development based at Columbia University. He has been a member of the Columbia faculty since 2001 and received that university's highest academic rank (University Professor) in 2003. In 2011 Stiglitz was named by Time magazine as one of the 100 most influential people in the world. Known for his pioneering work on asymmetric information, Stiglitz's work focuses on income distribution, risk, corporate governance, public policy, macroeconomics and globalisation.

Goldin has received wide recognition for his contributions to development and research, including having been knighted by the French Government and nominated Global Leader of Tomorrow by the World Economic Forum. He has published over 50 articles and 22 books. He is the presenter of three BBC series After the Crash, Will AI Kill Development? and The Pandemic That Changed the World, and co-author of Terra Incognita: 100 Maps to Survive the Next 100 Years being published in August 2020. More information can be found at iangoldin.org