We are justified to say that we are living through a new age of globalisation, which Professor Jeff Sachs calls the Digital Age. The hugely disruptive changes were already with us before Covid-19, but now we’ve been hurled head-first into the new age.

It is marked by enormous geopolitical, technological, and environmental disruptions, posing great risks as well as opportunities. To understand the Digital Age better, it is enormously valuable to gain a historical perspective.

Professor Jeff Sachs' new book The Ages of Globalization and this talk, explores the interactions of technology, geography, and institutions throughout human history, describing seven ages of globalisation and the nature of societal change from one age to the next.

To purchase the book: The Ages of Globalization 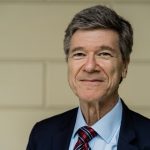 He has been advisor to three United Nations Secretaries-General, and currently serves as an SDG Advocate under Secretary General António Guterres. He spent over twenty years as a professor at Harvard University, where he received his BA, MA, and PhD degrees.

He has authored numerous bestseller books. His most recent book is The Ages of Globalization: Geography, Technology, and Institutions (2020). Sachs was twice named as one of Time magazine’s 100 most influential world leaders and was ranked by The Economist among the top three most influential living economists.