However, there remain technical challenges to overcome to realise fusion as well as various other enabling measures which will be needed to make fusion a reality as soon as possible.

In this talk, Professor Ian Chapman, CEO of the UK Atomic Energy Authority, will begin by explaining the UK government strategy to delivering fusion and setting this in the context of other major fusion programmes internationally. It will then describe the major technical challenges required to deliver a magnetic fusion powerplant and give a brief overview of some of the key deliverables and discoveries that will be required on that pathway. An overview of recent major discoveries in the field will be presented together with a future outlook for the pathway to delivering fusion power. 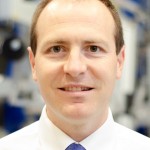 Ian Chapman became CEO of the UK Atomic Energy Authority and Director of the Culham Centre for Fusion Energy in October 2016. He has held a number of international roles in fusion, including membership of the Princeton Plasma Physics Advisory board, the Chinese Academy of Sciences Plasma Physics advisory board and chairing the IAEA International Fusion Research Committee.