Investment capital could be an enormously powerful driver of a sustainable future.

Success will depend on how well investors can rigorously quantify 'impacts' alongside ‘ESG’ risks and optimise sustainability decision-making at scale for trillions of dollars in assets.

In this talk Dr Tim Wittig, Oxford Martin Visiting Fellow, will discuss developing a single common information architecture for the quantification of sustainable investing approaches. Based on recent innovations in data science, artificial intelligence, and the 'logistics of data,' as well as established best practice such as the Common Task Method (CTM), this proposed architecture will address the key failures and asymmetries of the current ESG data ecosystem and create a durable infrastructure for quantified empirical solutions for any sustainability challenge. If deployed concertedly at scale with the proper capitalisation, resourcing, networks, and technology, this approach has the potential to transform the global investment landscape as well as the future of human society and our shared planet.

This talk will be live in-person and online 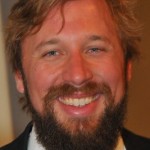 Tim conceived of and currently runs the central intelligence sharing system of the United for Wildlife Taskforces, a groundbreaking program of the Royal Foundation of the Duke & Duchess of Cambridge, which - using high-level formal commitments enforced by the sharing of actionable intelligence - has mobilized 150+ of the world’s largest banks, maritime shipping companies, and airlines to take meaningful action against global wildlife trafficking. He is a founding board member and head of intelligence for Focused Conservation, and an Associate Fellow at the Royal United Services Institute (RUSI)

Tim’s professional background is in targeting illicit networks, intelligence analysis, and African and global security. A life-long environmentalist and outdoorsman, Tim, like many people today, believes reversing the current catastrophic extermination of nature is the single most important issue of our time - a literal life-and-death struggle for the future of our common planet and ultimately humanity itself.

He came to work professionally in conservation after observing how the major threats to the environment today - species loss, climate change, pollution, et al - are all underpinned and driven often to a large extent by crime, corruption, and illicit networks. And that rigorous, hard-hitting analysis of these activities can be a game changer in how we confront threats to the world’s wildlife and ecosystems, which is the focus of Tim’s work today.