Shaping the energy systems of the future

With energy supply responsible for 65% of global greenhouse gas emissions, the transition to renewable energy sources is a critical part of the fight against dangerous climate change. We have the resources and the technology – the challenge is creating a reliable supply of power, both for developed countries used to having electricity at the flick of a switch, and for developing nations for whom a stable, affordable power supply is an essential foundation for economic growth.

To make the move from dirty to clean, the way that our energy systems work is going to have to become a great deal more complex. Renewable energy sources differ from fossil fuel ones in more than just their carbon emissions footprint; there are many more of them, scattered across wide areas, and, unlike a coal-fired power station that can burn day and night, they produce energy intermittently. Integrating these new, clean energy sources into our existing electricity systems is a huge challenge, but digitalisation means we now have the ability to deal with the massive amounts of data they will generate. This data will be the lifeblood on which the operating system depends, enabling the co-ordination of the many points of generation feeding into the grid as well as the storage and distribution of the power to increasingly flexible loads.

Exactly how we go about transforming the energy landscape was the question that the Oxford Martin Programme on Integrating Renewable Energy, established in 2015, set out to answer. Its ambition, broadly, is to build an understanding of how to integrate renewables while at the same time retaining a secure energy system, an issue which – above cost or availability – is now regarded as the main barrier to large-scale adoption of renewable sources. The challenges and uncertainties are both intrinsic – namely generation, distribution, storage and end use – and extrinsic, such as new technologies, business models and finance, social acceptability, and governance and regulation. The team, which includes economists, social scientists, materials scientists and engineers, set out to look at how all these factors influence and interact with each other, and what opportunities, synergies and constraints these interactions might present.

“The central question was, ‘How are our systems going to have to adapt and change to enable far more clean technologies to provide energy for society?’,” says Professor Malcolm McCulloch, who, with Professor Nick Eyre, leads the programme.

“The impact of human activity is now making a substantial difference to the planet’s ability to provide us with the services we depend on: fresh water, oxygen, stable temperatures, biodiversity – provisions that allow us to do everything from breathing through to making a mobile phone. We need to transform that environmental capital far more effectively, at much lower cost, and reverse some of those environment-to-society flows.”

Fossil fuel sources have been successful for many reasons. Key in this context is the relative simplicity they present for the energy system as a whole. “The amount of land that a coal-fired power station takes up is very small and focused, whereas renewables tend to be distributed over much larger areas,” says Professor McCulloch. “Going from point-based resources to decentralised, distributed resources has strengths and weaknesses. You need far more power sources, but these sources can be located far closer to customers, be those individuals, businesses or even electric vehicle charging facilities. You’ll also have a much wider range of people owning assets as the costs to start a solar ‘power station’ are much smaller.”

All this is good, he says, but it means the system as a whole becomes much more complex and difficult to control. The ability to digitalise information means it’s no longer prohibitively expensive to create a smarter distribution system, but organisations face a big challenge in how they adapt to dealing with all that data.

Enter Project LEO (Local Energy Oxfordshire), whose underpinning basis was developed by the Oxford Martin programme. Announced in early 2019, the £40 million initiative was one of only four energy projects to win funding from the UK government’s Industrial Strategy Challenge Fund. Led by distribution company SSEN it will use Oxfordshire as a test bed to explore how local energy demand can be balanced with local supply, and will include renewable energy sources, electric vehicles, battery storage and vehicle-to-grid technology. LEO and the three other ‘demonstrator’ projects are designed to show how local systems approaches can deliver cleaner and cheaper energy, producing better outcomes for consumers and contributing to economic growth for the UK.

Professor McCulloch is leading on the project’s modelling, data collection and systems mapping aspects. “LEO is essentially looking at how we get used to managing and creating value with those huge amounts of data being generated. What companies currently have to deal with, data-wise, is going to change dramatically once they’re maintaining and controlling decentralised power sources.”

It’s widely acknowledged that what’s going to be required over the coming years is a fundamental change from our current distribution network operator (DNO) model, to a distribution system operator model (DSO). A DNO can be thought of as the owner of the wires and the transformers, where as the DSO would actively control the system, telling people whether energy needs to be put in or taken out, and what power sources need to be wound down.

“You can think of the DNOs as members of the orchestra, and of a DSO as the conductor,” says Professor McCulloch. “Previously there was only a very simple piece of music being played, and the only decision to be made was whether another person could join the orchestra. But with the piece now getting more complex, the timing between the instruments gets more important. The conductor needs to know not just who’s playing but what notes are being played, and how those notes interact between the different instruments. For fifty years the energy orchestra has been playing Three Blind Mice - now it needs to start playing Beethoven’s Ode to Joy.”

Exactly what the shape of the conductor’s role will be, and who might fulfil it, were issues worked through by Professor McCulloch and his colleagues on the Integrating Renewable Energy programme. They’re now being tested in the real world with the LEO project.

“Imagine there’s a solar farm in north Oxfordshire which at 3pm produces a kilowatt hour of energy, which then gets used in Oxford between 7pm and 8pm that evening,” says Professor McCulloch. “The question is what is the journey? And where is the energy potentially being stored so it can be used in that time period? It’s more subtle than energy in, energy out - it’s a question of how all the players in that orchestra work together to make sure that energy is available at the right place and right time.”

The push for change is coming from both business and government, he says. “Of course it’s going to require a lot of investment. But you’re balancing out the cost of the conductor with the cost of having assets that are uncoordinated. This way you are able to unleash a whole lot of capacity in the network that currently isn’t available, because no-one is conducting the orchestra at the moment. The additional value created far outweighs the money spent.”

In addition to Project LEO, the work of the team has also spun out into numerous other major energy initiatives:

“The work that the Integrating Renewable Energy team has done, and the way that we work together, has gone a long way to increasing the knowledge of the requirements of future energy systems,” says Professor McCulloch. “We’ve had the time and the space to really get under the skin of the issues, and of the expertise that each researcher brings to the group. Our regular meetings always start with half an hour of just chatting informally, something that creates a real place to foster serendipity. Then we have a seminar for an hour, where the goal is never to let the speaker get to their last slide. In most cases the person giving the talk actually learns as much as the rest of us.

“Bringing that shared knowledge to bear on the problems we’ve worked through is making a huge impact on the research that’s now being taken forward.”

In this video Malcolm McCulloch and Nick Eyre of the Oxford Martin Programme on Integrating Renewable Energy discuss how we can overcome the barriers to creating a clean energy system. 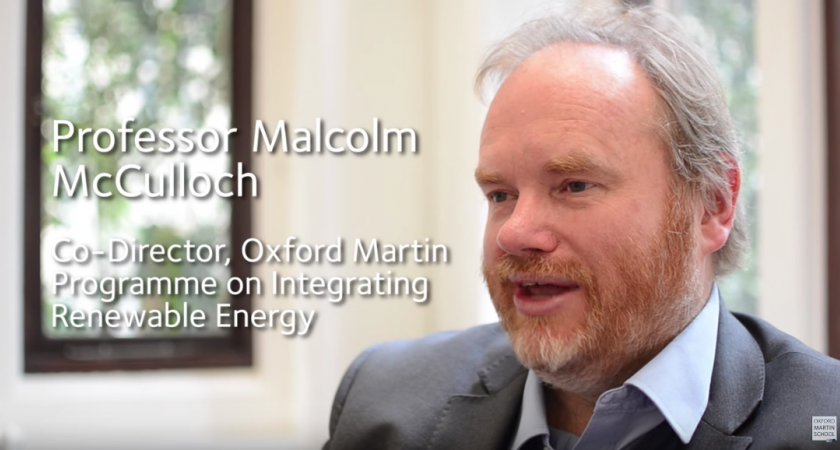