Neutron reflectometry has been used to study the structure of the biosurfactant, surfactin, at the air/water and at the hydrophobic solid/water interfaces. Three different deuterated surfactins were produced from the Bacillus subtilis strain: one perdeuterated, one with the four leucines perdeuterated, and one with everything except the four leucines perdeuterated. The neutron reflectivity profiles of these three samples in null reflecting water and in D2O with a seventh profile of the protonated surfactin in D2O were measured at pH 7.5. This combination of different isotopic compositions made it possible to deduce the distribution of each type of labeled fragment in the surfactin. Surfactin is found to adopt a ball-like structure with a thickness of 14 ± Å and an area per molecule of 147 ± 5 Å2. This makes it more like a hydrophobic nanoparticle, whose solubility in water is maintained only by its charge, than a conventional surfactant. This is probably what makes it surface-active at such low concentrations and what contributes to its forming very compact surface layers that are more dense than observed for most conventional amphiphiles. The reflectivity data were fitted by a model in which the structure of surfactin was divided into three fragments: the four leucines taken as a group, the hydrocarbon chain, and a hydrophilic group containing the two negative charges. An analysis of the reflectivity gave the following separations between fragments, where zero corresponds to the Gibbs plane for zero water adsorption: chain?water 7 Å, hydrophile?water 1 Å, and leucines?water 6.5 Å, all ±1 Å. The overall structure of the layer appears to be identical at a hydrophobic octadecyltrichlorosilane-coated silicon surface where the thickness of the surfactin layer is 15 ± 1 Å and the area per molecule is 145 ± 5 Å2. Finally, the structure of surfactin micelles has been examined by means of small-angle neutron scattering. The aggregation number was found to be unusually small at 20 ± 5. The structure of the micelle is of the core?shell type with the hydrocarbon chain and the four hydrophobic leucines forming the core of the micelle.

Knowledge for a warmer world: A patent analysis of climate change adaptation technologies 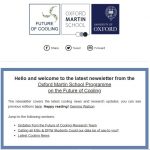 Where Are All the Jobs? A Machine Learning Approach for High Resolution Urban Employment Prediction in Developing Countries