Among the constitutive elements of the responsibility to protect (R2P), prevention has been deemed by many as the most important. Drawing on contributions from an international group of academics and practitioners, this book seeks to improve our knowledge of how to operationalize the responsibility to prevent genocide, crimes against humanity, war crimes, and ethnic cleansing.

The central argument is that the responsibility to prevent should be conceptualized as crimes prevention. The first part of the volume develops a strategic framework, which includes identifying the appropriate scope and substance of R2Ps preventive dimension and distinguishing between systemic and targeted approaches. The second section examines some of the tools that can be used, and have been used, to prevent the escalation of dynamics towards the commission of atrocity crimes (tools such as sanctions, mediation, international criminal justice, and the use of military means), as well as the operational challenges that tend to obstruct global efforts to prevent such crimes. The third and final section draws lessons from actual cases of preventive action, both historical and recent, about the relative success of particular tools and approaches.
As the first edited collection of its kind, devoted exclusively to the preventive dimension of R2P, The Responsibility to Prevent intends to inform and shape the growing debate on how to approach atrocity crime prevention and how to build the capacities needed to implement the imperatives at the heart of R2P.

Co-author Professor Jennifer Welsh is a Co-Director of the Institute for Ethics, Law and Armed Conflict (ELAC) and the book is based on research and writing carried out over four years at ELAC.

Professor Welsh is Chair in International Relations at the European University Institute (Florence, Italy) and a Senior Research Fellow at Somerville College, Oxford. She is co-director of the Oxford Institute for Ethics, Law and Armed Conflict. In July 2013, she was named by UN Secretary Ban ki-moon as his Special Adviser on the Responsibility to Protect. Professor Welsh is the author and editor of several books and articles on the responsibility to protect, humanitarian intervention, the UN Security Council, and the principle of sovereignty. She sits on the editorial boards of the journals Ethics and International Affairs and Global Responsibility to Protect, and the Cambridge University Press series in International Relations. From 2014, she will be directing a five-year research project, funded by the European Research Council, on the 'individualization of war'.

Dr Serena Sharma is a Lecturer in the Defence Studies Department at King's College. Prior to joining King's Serena was based at the Oxford Institute for Ethics, Law, and Armed Conflict (ELAC) in Oxford University's Department of International Relations. She also held a Lectureship in International Relations at the Queen's College and a Research Fellowship at Wolfson College, Oxford. In 2010 Serena was appointed as the United Nations Association (UK) Special Advisor on the Responsibility to Protect. She holds a PhD in International Relations and a Masters in Human Rights from the London School of Economics and Political Science (LSE). She has served as an editor and associate editor of Millennium: Journal of International Studies. Prior to commencing her graduate studies, Serena worked with the former Canadian Minister of Foreign Affairs, Lloyd Axworthy. 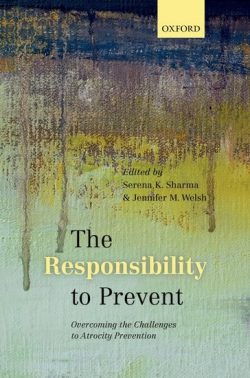