Increasing temperatures and prolonged heatwaves are a deadly threat in tropical geographies where precarious urban infrastructures, informal urbanisation, and socio-economic and spatial exclusions create new forms of thermal vulnerabilities and deprivations. This project reflects on the concept of ‘cooling poverty’ in Rio de Janeiro. In this city, there are 1.5 million people, mostly afro-descendants, who live in informal settings (favelas). Cooling poverty may force people to adopt obsolete, inefficient and hazardous cooling appliances such as old air conditioners, which represent a risk for people’s health (legionella disease); or water tanks, which facilitate the spread of mosquito-borne diseases (e.g., dengue, chikungunya). Moreover, the pursuit of cooling through energy inefficient air-conditioning in the favelas and other impoverished areas is one of the most common reasons for the occurrence of electricity thefts (Mazzone, 2020), and frequent blackouts.

The project shares the voices, lived experiences and local knowledge of people at the ‘margins’ who are socially disadvantaged because of race, religion, gender, class, sexuality, age, disabilities, ethnicity and migration status. To do so, it uses qualitative approaches such as in-depth interviews, art-based methods and online energy forums (through WhatsApp or Facebook closed-groups). These participatory approaches form a novel and effective method not only to better understand local realities of thermal vulnerabilities, but also as a strategy which includes differentiated needs in the formulation of public policies targeting energy poverty. 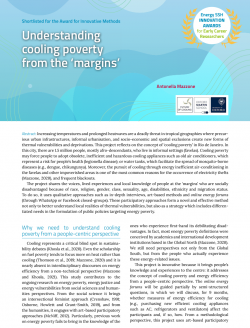