When the UK joined the EU in 1973 all previous trade barriers with the EU were abolished, which led to a strong intensification of trade with the European continent.

This situation will soon be a thing of the past, however, as new trade barriers will be erected with the withdrawal. Since the food self-sufficiency rate in the UK is particularly low, newly invoked trade barriers will significantly affect how food is produced and consumed in the UK. 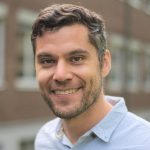 Florian Freund is working as an economic researcher at the Johann Heinrich von Thünen Institute of Market Analysis in Braunschweig, which serves as a research unit for the Federal Ministry of Food and Agriculture in Germany.

He is mainly involved in model-based policy impact assessment where he develops and maintains a large-scale economic simulation model. This model is frequently employed to inform policy makers and other stakeholders about various consequences of different agricultural policy options. He has published in the field of regional and international economics. His current research focusses on impacts a Brexit might have on food and agricultural markets.

He also serves as a lecturer at the Technical University of Braunschweig. Previously he was employed as a researcher at the Chair of International and Monetary Economics at the University of Regensburg (2010-2016 ) and he has worked as a policy consultant at Energy Environment Forecast Analysis GmbH und co. KG (EEFA) based in Münster (2009-2010).

Food futures: how can we safeguard the planet’s health, and our own?