Crocodiles once roamed the Arctic, during the Eocene about 50 million years ago. Polar regions were lush and warm. Greenhouse gas concentrations were higher than today, but at most about 4 times higher - not enough, according to current climate models, to have warmed the Arctic sufficiently. Something appears to be missing in current models to account for the warmth of the past.

The likely culprits are clouds, especially the low clouds that cover vast areas of tropical oceans. These clouds cool Earth by reflecting sunlight back to space. It is possible that the cloud cooling may have been absent or strongly diminished in past greenhouse climates, raising questions about our climate future. To predict our climate future more accurately, breakthroughs in the modeling of clouds and in the accuracy of climate predictions are needed. They are now within reach, thanks to advances in computing and Earth observations from space and our ability to fuse models with massive amounts of data. 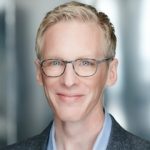 Tapio Schneider​ ​is the Theodore Y. Wu Professor of Environmental Science and Engineering at Caltech and a Senior Research Scientist at NASA’s Jet Propulsion Laboratory. His work has elucidated how rainfall extremes change with climate, how changes in cloud cover can destabilise the climate system, and how winds and weather on planetary bodies such as Jupiter and Titan come about. He is currently leading the Climate Modeling Alliance, whose mission is to build the first Earth system model that automatically learns from diverse data sources to produce accurate climate predictions with quantified uncertainties.

He was named one of the “20 Best Brains under 40” by Discover Magazine, was a David and Lucile Packard Fellow and Alfred P. Sloan Research Fellow, and is recipient of the Rosenstiel Award of the University of Miami and of the James R. Holton Award of the American Geophysical Union.