Dr David Nabarro, former Special Representative of the United Nations Secretary-General for Food Security and Nutrition, will give a talk on what implications there will be for the planet and us in linking nature, food and the climate. 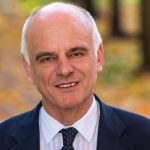 Dr David Nabarro is Professor of Global Health at the Imperial College London and supports systems leadership for sustainable development through his Switzerland based social enterprise 4SD. Furthermore, he is Co-Facilitator for the Climate Action Summit in September 2019, Advisor at the Global Commission on Adaptation in Rotterdam, and curator of the Food Systems Dialogues.

David secured his medical qualification in 1974 and has worked in over 50 countries – in communities and hospitals, governments, civil society, universities, and in United Nations (UN) programmes. David worked for the British government in the 1990s as head of Health and Population and director for Human Development in the UK Department for International Development. From 1999 to 2017 he held leadership roles in the UN system on disease outbreaks and health issues, food insecurity and nutrition, climate change and sustainable development.

In October 2018, David received the World Food Prize together with Lawrence Haddad for their leadership in raising the profile and building coalitions for action for better nutrition across the Sustainable Development Goals.

Food futures: how can we safeguard the planet’s health, and our own?