In this book talk, Professor Sonia Contera will talk about how Nanotechnology is transforming medicine and the future of biology.

This book talk will be followed by a drinks reception, book sale and book signing, all welcome. 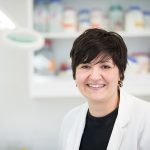 Her work lies at the interface of physics, biology and nanotechnology. She is an expert in atomic force microscopy of biological systems and she has a special interest in the role of mechanics in biology. She is interested in the role of mechanics in bridging scales and in modulating transport and transmission of information, including through mechanoelectrical coupling in subcellular structures, cells and tissues.

Her work is on the mechanics of cells, tissues, proteins and membranes and she designs nanomaterials that mimic biological functions for bio/medical applications such as drug delivery or cell cultures.

She is a Fellow of Green Templeton College; was a Member of the World Economic Forum Global Agenda Council on Nanotechnology 2014-2016 and recently became a member of the Physical Sciences Strategy Advisory Team of the Engineering and Physical Sciences Research Council (EPSRC) of the UK. In 2017 she was elected Chair of Scanning Probe Microscopy section of the Royal Microscopical Society and from 2018 she is a member of the Advisory Committee on Science and Innovation to the Andalusian Government (Spain).

Nano Comes to Life opens a window onto the nanoscale - the infinitesimal realm of proteins and DNA where physics and cellular and molecular biology meet - and introduces readers to the rapidly evolving nanotechnologies that are allowing us to manipulate the very building blocks of life. Sonia Contera gives an insider's perspective on this new frontier, revealing how nanotechnology enables a new kind of multidisciplinary science that is poised to give us control over our own biology, our health, and our lives.

Drawing on her perspective as one of today's leading researchers in the field, Contera describes the exciting ways in which nanotechnology makes it possible to understand, interact with, and manipulate biology - such as by designing and building artificial structures and even machines at the nanoscale using DNA, proteins, and other biological molecules as materials. In turn, nanotechnology is revolutionizing medicine in ways that will have profound effects on our health and longevity, from nanoscale machines that can target individual cancer cells and deliver drugs more effectively, to nanoantibiotics that can fight resistant bacteria, to the engineering of tissues and organs for research, drug discovery, and transplantation.

The future will bring about the continued fusion of nanotechnology with biology, physics, medicine, and cutting-edge fields like robotics and artificial intelligence, ushering us into a new "transmaterial era." As we contemplate the power, advantages, and risks of accessing and manipulating our own biology, Contera offers insight and hope that we may all share in the benefits of this revolutionary research.