This talk is part of Oxford Green Week, a city wide festival celebrating sustainability and inspiring people to take action against climate change through a series of events.

The high seas, the waters beyond national jurisdiction, comprise 61% of the area of the ocean and 73% of its volume. From the air it largely appears uniform, but it in fact hosts a great diversity of habitats, from the ocean surface to abyssal plains, seamounts, submarine plateaus and deep-sea hydrothermal vents. Globally, about 12% of fish are extracted from the high seas, representing about 15% of the total value of marine wild-capture fisheries. However, many commercially targeted fish species spend part of their time migrating through and feeding in the high seas. This region of the ocean also performs many other ecosystem services for humankind such as carbon sequestration and nutrient recycling.

The high seas are under severe pressure from both direct and indirect human impacts. Direct impacts include the effects of overfishing and destructive fishing impacts in the form of bycatch and habitat loss. Plastic debris has now reached all parts of the ocean, and other forms of pollution are causing damage to populations of predators, although its significance is unclear. Climate change effects, including warming, ocean acidification and deoxygenation are also driving change in the high seas . These effects are set to increase in severity and likely to interact with other stressors. New activities in the ocean, including deep-sea mining, offshore aquaculture and renewable energy technologies may soon add to these impacts.

Currently there is no legal framework for spatial conservation measures in the high seas. Establishing this, and other measures to protect biodiversity across all the ocean are currently being discussed at the Biodiversity Beyond National Jurisdiction (BBNJ) negotiations at the UN in New York. These will lead to a new implementing agreement for the UN Convention on Law of the Sea. In this talk, Prof Alex Rogers will present what a network of marine protected areas in the high seas might look like, protecting 30% of known conservation features and taking into account climate change impacts. This is based on the Greenpeace 30X30 report.

We will also hear from Dr Gwilym Rowlands, Oxford Martin Fellow on the Oxford Martin Programme on Sustainable Oceans, who will consider how such a network of marine protected areas could be enforced and the potential benefits to the ocean.

This talk will be followed by a drinks reception, all welcome. 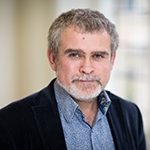 Professor Alex Rogers is the Science Director for Rev Ocean and an Associate on the Oxford Martin Programme on Sustainable Oceans. He is also a Professor of Conservation Biology at the Department of Zoology and a Fellow of Somerville College, University of Oxford. He obtained his first degree in Marine Biology at the University of Liverpool and a Ph.D. in the genetics and taxonomy of marine invertebrates also at Liverpool. In his early career Alex held Research Fellowships at the Marine Biological Association, Plymouth and at the University of Southampton’s National Oceanography Centre. Since then he has lead the Core Programme on Biodiversity at British Antarctic Survey and then moved to the Institute of Zoology, Zoological Society of London, where he became a reader in marine ecology.

Current research projects are focused on the ecology and evolution of deep-sea and ecosystems and human impacts on them.