Please note this talk has been postponed. We hope to reschedule for a later date.

It is no coincidence that countries with mission-driven governments have fared better in the COVID-19 crisis than those beholden to the cult of efficiency.

Join Mariana Mazzucato, UCL professor and author of The Entrepreneurial State and The Value of Everything, in conversation with Oxford Martin School Director, Sir Charles Godfray, to discuss why states must invest again in dynamic capabilities and capacity - not only to govern more effectively during the pandemic, but to ultimately build back better. 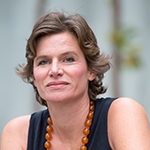 She is winner of the 2014 New Statesman SPERI Prize in Political Economy, the 2015 Hans-Matthöfer-Preis, the 2018 Leontief Prize for Advancing the Frontiers of Economic Thought and the 2019 All European Academies Madame de Staël Prize for Cultural Values. She was named as one of the '3 most important thinkers about innovation' by the New Republic, and is on The Bloomberg 50 list of ‘Ones to Watch’ for 2019.

Her highly-acclaimed book The Entrepreneurial State: debunking public vs. private sector myths (2013) investigates the role of public organisations in playing the ‘investor of first resort’ role in the history of technological change. Her 2018 book The Value of Everything: making and taking in the global economy (2018) brings value theory back to the center of economics in order to reward value creation over value extraction.

She advises policy makers around the world on innovation-led inclusive and sustainable growth. Her current roles include being a member of the Scottish Government’s Council of Economic Advisors; the South African President’s Economic Advisory Council; the OECD Secretary General’s Advisory Group on a New Growth Narrative; the UN’s Committee for Development Policy (CDP). Through her role as Special Advisor for the EC Commissioner for Research, Science and Innovation, she authored the high impact report on Mission-Oriented Research & Innovation in the European Union, turning “missions” into a crucial new instrument in the European Commission’s Horizon innovation programme.