This talk will focus on the disruptive ingredients and recipes at the heart of Ocado's ongoing journey of self-disruption and reinvention.

One of these recipes relates to growing, manufacturing and delivering our food in much more efficient, scalable and sustainable ways. This is going to require some much bigger thinking. 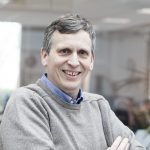 After joining Ocado in 2006, Paul initially worked on warehouse control systems and then joined the team designing Ocado’s next highly automated fulfilment centre. After establishing new teams for Simulation and Mobile development, Paul then co-wrote the first of Ocado’s award winning mobile apps.

Ocado Technology, with its 1900 engineers, is responsible for building all the technology that powers Ocado's end-to-end e-commerce, fulfilment and logistics platforms.

Ocado are now busy signing deals with large bricks & mortar grocery retailers around the world who wish to use the Ocado Smart Platform to operate online grocery scalably, sustainably and profitably.

Having handed over the leadership of Ocado Technology in April 2018, Paul now leads the Office of the CTO whose mission includes exploring opportunities to use Ocado's technologies and competencies to disrupt other sectors, research activities and the technology vision and future proofing of the business.

Paul read Physics at St John's College, Oxford before then entering the computer industry. He has worked in software engineering, consultancy, interim management and a number of software start-ups.

In what little spare time he has alongside his work and family, Paul loves to invent and build stuff, design PCBs, write software and generally tinker.