When it comes to debates around the future of work, there’s a distinct dichotomy. We’ve all heard tell of nightmarish scenarios where huge swathes of workers will be rendered redundant by ‘the march of the machines’. But there are also those who point to the past, to periods of hugely disruptive technological change – revolution, even – which societies have managed to survive, and dismiss the notion of a jobs apocalypse.

In September 2013 economist Dr Carl Benedikt Frey and machine learning professor Michael Osborne released a paper that made a startling prediction about the future of work: that nearly half of all US jobs were at risk of automation. That research led to the Oxford Martin Programme on the Future of Work, established with the support of Citi, which set out to look at how technology is transforming companies and industries, how and why this impact differs geographically, and what the implications are for living standards, inequality and social mobility.

“We are trying to understand the history and the future of job automation,” says Dr Frey. “To dismiss the threat of automation is to get the history wrong. Even if the future mirrors the past there will still be painful periods of adjustment, which is something that societies will need to be prepared for.

“You can see today that there’s a fragmentation in society, with tech cities that are thriving and old centres of manufacturing, such as Detroit, where automation has contributed to decline. Where that happens you then see the wider jobs landscape being impacted and the service industries being hit. In areas that are badly affected you end up with with rising crime, poor health outcomes, high rates of marital breakdown. People in those communities don’t feel that optimistic about the future, and we've seen this leading to the shift towards voting for populist political candidates.”

So far, so bleak. And when it comes to the capabilities of technology, says Dr Frey, we’ve seen nothing yet. “Automation is no longer just confined to simple, rule-based activities. In the age of machine learning we can teach computers to tap into our experience and data - this is how algorithms are improving in a wide variety of domains, be it translation work, medical diagnostics or even driving a car.”

Let’s rewind to that 2013 study, and take a look at exactly how Frey and Osborne came to their conclusions.

‘The Future of Employment: How Susceptible Are Jobs To Computerisation?’ was the first study to put a number on the future risk that automation would pose to jobs. The debate around machines taking jobs was already intense, with economists pointing to it as a potential reason for rising unemployment rates. Numerous studies had already confirmed the fact that routine-intensive jobs – ones made up mainly of tasks that followed well-defined procedures - were indeed being replaced in large numbers by the use of sophisticated algorithms.

What Frey and Osborne wanted to do was assess the the potential impact of automation in decades to come. Their approach was to create an algorithm that could analyse the Occupational Information Network (O*Net), an online US database which, through surveys of the working population, has collected some 20,000 unique task descriptions, along with data on the skills, knowledge and abilities required by different occupations. As well as tasks related to a role, the database also lists other features of jobs, such as face-to-face interaction with customers, negotiating, development of new ideas and handling artefacts.

They assembled a group of machine learning experts to provide a ‘training dataset’ for the algorithm, so that it could learn about the features of automatable vs. non-automatable jobs. In total the analysis covered 702 occupations, at that time representing 97% of the US workforce. The stark resulting figure – that 47% of jobs were at risk – proved to be a watershed moment in the debate: it was clear that labour landscape as we know it was ripe for radical change, with large sections of the job market vulnerable to takeover by intelligent machines.

“What the jobs that emerged as relatively easy to automate had in common was that they tended to be low-skilled, low-income jobs,” says Dr Frey. “But when we look at growing industries, many of the new jobs being created are high-skill, high-income jobs. So we’re going to require a very significant reallocation of the workforce from low-skill domains to high-skill ones, and education is going to have play a significant role in helping people transition between those jobs.”

As well as investing in education and re-training, governments may have to look at expanding housing supplies in and around cities, as this is where the jobs booms fuelled by new technology tend to take place, says Dr Frey. He is keen to point out many service sector roles will still be in high demand, especially as societies grow richer, creating new opportunities for displaced workers: “There doesn’t seem to be any limit when it comes to the emergence of new in-person services. Think of the growth in demand for yoga or fitness instructors. Traditional roles such as kindergarten teachers or nurses will continue to be in demand – these roles may not be highly paid but they still require a multitude of inter-personal skills, such as social intelligence, perception and manipulation. These are areas where humans still hold the advantage.”

The programme’s research has gone on to examine questions of technology and work from a range of perspectives, including the impact of the computer revolution on the fortunes of cities, the changes to jobs and wages brought about by the advent of the gig economy, and the effect that job automation may have had on the results of the 2016 US presidential election.

“If people want to understand why three key swing states in the 2016 US presidential election – Wisconsin, Pennsylvania and Michigan - ended up being won by Donald Trump, then the evidence suggests that the shifting of labour to robots has a big role in accounting for that,” says Dr Frey. “We can see similar episodes of political upheaval if we look back at history, where technology hasn’t been just a driver of economic change, but also a very profound driver of social change.

“The fact is that these sorts of transitions will never be painless, and it is important to try to put the right policies in place to help manage the transition. There’s an inherent trade-off in that some will lose out in the short run. But the next generation has always been better off.”

If complex social interactions and creativity are the hardest things to automate, then those are things that we should be focusing on in schools

When it comes to future-proofing societies, it’s clear that education is key. But Dr Frey says we need to think creatively about it. “On a typical degree course, for example, you enrol for three years, but how much you learn by the end is basically up to you. I think we need to change that model so the learning is fixed, but the time is variable. That way people could complete their degrees at different speeds, as it suits them.

“Secondly, I think that we need to look at how we’re teaching, and how that prepares young people for the world of work. If complex social interactions and creativity are the hardest things to automate, then those are things that we should be focusing on in schools. We can probably automate some basic teaching because AI can actually now fulfil the role of an interactive tutor, up to a certain point. But we should complement this with something similar to tutorial systems: teaching children in smaller groups, writing essays, holding debates and discussions. This would foster social skills and creative thinking, the domains where humans are going to hold the comparative advantage in the future.” 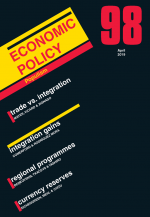 Uber Happy? Work and Wellbeing in the “Gig Economy” 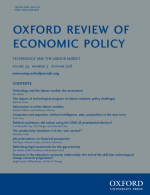 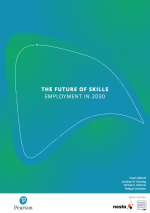 The Future of Skills: Employment in 2030

Industrial Renewal in the 21st Century: Evidence from U.S. Cities