Two main reasons point to why people who have anti-vaccine beliefs and attitudes are not the sole cause of low vaccination:

1. Anti-vaxxers are in the minority

The impression of most people is that this group is bigger than they actually are when in fact the number of people explicitly not vaccinating tends to be very small. In the US vaccine refusal is at 2%. A similar rate is found in Europe, and these numbers have remained stable over time. We fear anti-vaxxers may influence others. But looking at sharp drops in vaccinations over time and across populations these have been connected with a particular controversy, event, or change of political environment not usually directly anti-vaccination in nature.

For example a proportion of opposition against the human papillomavirus (HPV) vaccine is attached to moral concerns. Some parents have felt a vaccine against a virus that can be sexually transmitted is inappropriate for children. And as historian Elena Conis has shown, even concerns about a possible link between vaccines and autism were already brewing for years before the famous Wakefield scandal, often coming from the autism community itself.

It is hard to find a powerful anti-vaxx group or movement today that has had a substantial impact, although one small example is the 2017 outbreak of measles in Minnesota where a Somali community is reported to have been targeted by anti-vaxxers who saw potential to influence this group using fears of the MMR vaccine and autism.

Explanation for this attitude-behaviour mismatch varies from social pressure to repercussions for not vaccinating. For child vaccination, usually both parents have to oppose vaccination, although in some countries such as the US it is typically mothers who make health decisions. Disagreements between parents have resulted in high profile court cases ruling in favour of the pro-vaccination parent. Penalties are also imposed by governments on parents not vaccinating their children, including preventing school entry in the US or stopping welfare payments in Australia. 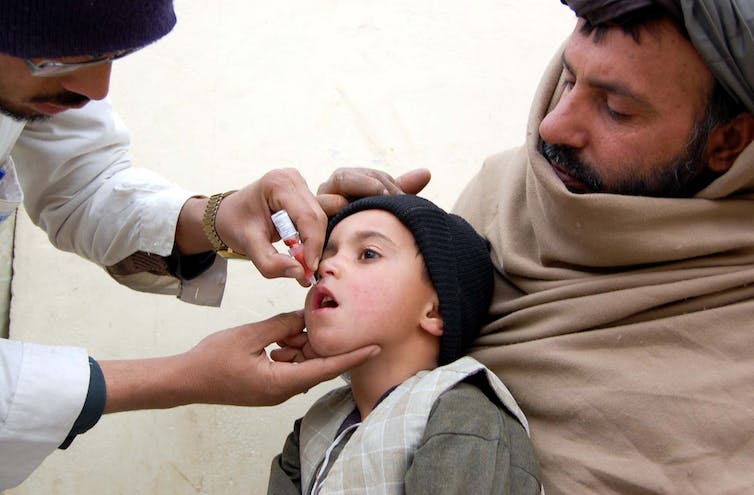 A boy in Chaman, Pakistan, receives the polio vaccine. Asianet-Pakistan/Shutterstock.com

If anti-vaxxers do not provide the full explanation for falls in vaccination rates, what leads to the spotlight on them? While mainstream media is generally pro-vaccine, anti-vaxxers make a good story. The coverage and attention given to this group is disproportionately high compared to the actual impact they have.

Less blame is extended to parents who delay vaccination or pick and choose the vaccines they want. These “hesitant” parents make up a larger group, as one Canadian study found. The portrayal of vaccination views as just “pro” or “anti” undermines more nuanced depictions, such as of hesitant parents, and can be detrimental on a number of fronts.

The undue significance and greater profile given to anti-vaxxers makes them appear to be a bigger problem than they actually are. Presenting their views as more widespread leads to “false balance” in the media and increases polarisation between those that support and oppose vaccination.

False balance, according to philosopher Peter Ellerton gives an equal platform to views that do not have an equal weight of evidence supporting them, simply for the sake of appearing balanced. Related to this, polarisation splits the debate into those who support an issue and those who oppose it. Not much room is left for a variety of opinions in between. This makes it difficult for each side to find common ground or indeed any basis for discussion.

The serious downside of so much attention paid to anti-vaxxers is that other issues remain hidden. What about the other reasons people don’t vaccinate? Less popular topics include those of poverty and exclusion, along with inadequate supply of and access to vaccine services, both on a global and a local level. However, the simple anti-vaxxer explanation is often preferred to a consideration of these more complex issues.

At the global level, the vaccination debates, activities, and decisions of dominant countries with greater spending power and political clout can impact poorer countries. This impact is underexplored. For example, Japan suspended their recommendation for the HPV vaccine in 2013. It ignited public concerns about the safety of the vaccine in nearby countries such as the Philippines and even more distant countries like Kenya, where there exists a persistent fear about the government introducing fertility controls through health interventions.

These issues of disparity between resources and influence can also be missed at a local level. Economically deprived areas, where it is more difficult to get advice on child health and vaccination services also explain some lower rates or unvaccinated pockets. This is especially true for minority groups (such as Roma people in Romania).

This doesn’t mean anti-vaxxers are harmless or that herd immunity isn’t important. People who are suspicious of vaccines, and openly tout their views, can be very harmful to public health. Rather we need to be wary of creating strawmen that don’t help in addressing the multiple problems that can cause low vaccination rates. Journalists and public health experts aim to engage people with a topic that has many different aspects. Some are attempting to move beyond an easier, emotional narrative but these sorts of accounts, which tend to be longer and more investigative, are few and far between.

Cities could be MORE important post-pandemic, not less

Paradoxically, more in-person work environments and the concentration of jobs in cities could be a medium- to long-term impact of the pandemic’s shift to remote working, suggests Citi GPS Technology at Work v6.0: The Coming of the Post-Production Society.

Three Oxford Martin School academics have been included in the 2021 Queen’s Birthday Honours List, in recognition of their research and contributions to tackling the COVID-19 pandemic.

Professor Charlotte Williams OBE has been awarded the Tilden prize from the Royal Society of Chemistry, celebrating the most exciting chemical science taking place today. Professor Williams was awarded the prize to honour her contributions to sustainable polymer chemistry.