One estimate suggests that $2.3trillion was invested in infrastructure worldwide last year.

That vast investment has provided roads, power plants, mobile phone networks, dams and recycling plants. Whether those investments have been sustainable is questionable.

As well as providing essential services that people need, infrastructure too often locks in carbon emissions, fragments habitats and opens them up for exploitation, appropriates land and exacerbates inequalities. In many respects, choices about infrastructure investment are a remarkable point of leverage, when the future course of development is set, literally, in concrete.Too often these decisions are subject to political patronage, rent seeking and worse.

This lecture will examine the many impacts that infrastructure can have on sustainable development, for better or for worse. Professor Hall will share experiences of establishing long-term plans for sustainable infrastructure in many countries around the world. 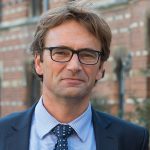 Professor Jim Hall FREng is Professor of Climate and Environmental Risks in the School of Geography and the Environment, a Senior Research Fellow in the Department of Engineering Science and fellow of Linacre College. He was director of the Environmental Change Institute from 2011 to September 2018.

His research focuses upon management of climate-related risks in infrastructure systems, in particular relating to various dimensions of water security, including flooding and water scarcity.

Jim Hall is a member of the UK independent Committee on Climate Change Adaptation. In 2010 Jim was elected as a Fellow of the Royal Academy of Engineering "for his contribution to the development of methods for flood risk analysis, which underpin approaches for flood risk management in the UK and internationally." He is now a member of the Engineering Policy Committee of the Royal Academy of Engineering and the Public Voice Committee of the Institution of Civil Engineers. He was a member of the panel conducting the Institution of Civil Engineer’s 2014 State of the Nation Infrastructure assessment.

Until 2015 Jim Hall was co-chair of the Global Water Partnership / OECD Task Force on the Economics of Water Security and Sustainable Growth. He leads the UK Infrastructure Transitions Research Consortium, which has developed the world’s first national infrastructure simulation models for appraisal of national infrastructure investment and risks. His book "The Future of National Infrastructure: A System of Systems Approach" was published by Cambridge University Press in 2016.

Jim was a Contributing Author to the Nobel Prize-winning Fourth Assessment Report of the IPCC. Amongst other projects, he led the ARCADIA project that developed methodology and tools for quantified analysis of climate risks in London. He was until 2010 Deputy Director of the Tyndall Centre for Climate Change Research, leading the Tyndall Centre’s research programme on climate change and cities, which yielded a highly innovative integrated assessment of climate change adaptation and mitigation in London.